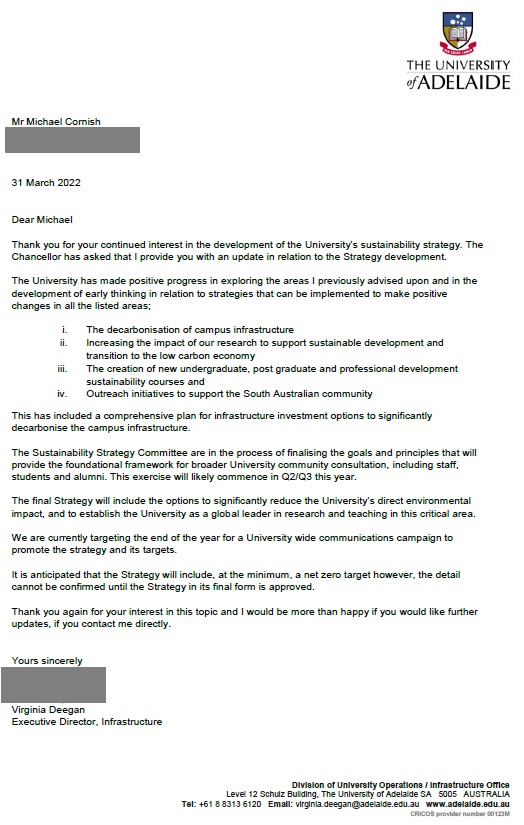 I write to you as a former Senior Adviser to the Federal Member for Mayo, Ms Rebekha Sharkie MP with a keen interest in public health and environmental issues.

I recognise there are potential political obstacles to the introduction of more stringent heavy vehicle emissions standards, especially from the Government’s junior Coalition partner.

However – and without seeking to encourage inaction on heavy vehicle emission standards – progressing action on the emissions standards for light (passenger) vehicles presents an opportunity to the Coalition that tangibly demonstrates its commitment to public health and net zero emissions, and at much lower political risk.

“…there is a strong case for mandatory standards to reduce noxious emissions from road vehicles. The costs of air pollution from road vehicles are not borne directly by the vehicle manufacturers or by owners but are shared by the community. As such the problem cannot be addressed effectively by the operation of market forces alone as there is no commercial reason to do so. Government action to strengthen noxious emissions standards are internationally recognised as a very effective measure to reduce urban air pollution, and such standards have managed to deliver improvements in urban air quality despite growth in vehicle use.”

The Draft RIS then proposes:

Indeed, I would highly recommend that the Federal Government fast-track the Euro 6d mandate for light vehicles, commencing the mandate much earlier than 2027-28 and within the next term of Government.

This commitment – and the framing its introduction within the next electoral term – would be a very useful concrete measure for the Prime Minister and Australian Government to deploy at the forthcoming Glasgow 2021 United Nations Climate Change Conference (COP26).

May I then kindly request – when will the Government make its decision about the introduction of more stringent light and heavy vehicle emissions standards, and what will be the likely timeframe for their commencement?

Will the Government be adopting the core proposal of the relevant Draft RIS, namely, adopting a Euro 6d mandate for light vehicle emissions standards?

I hope that the Government can see both the political opportunity this proposal presents, as well as the public health and environmental benefits it would create for our fellow Australians. 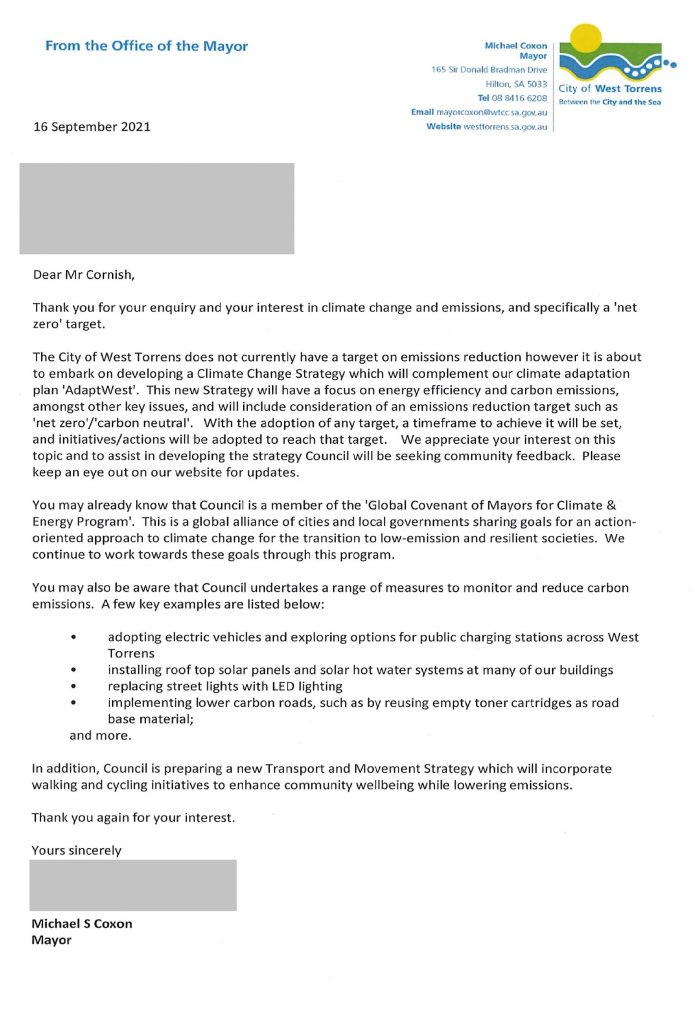 RE: The University of Adelaide and a net-zero emissions target

I hope this correspondence finds you well; thank you in advance for your time and consideration. I am writing to you in your capacity as Chair of the University of Adelaide Council and would be appreciative if you were able to bring my correspondence to the attention of the Council.

I am writing in my personal capacity as an alumni and former staff member of The University of Adelaide. To avoid all doubt, I am not writing in any way in my capacity as a current employee within the Group of Eight directorate.

During my time as former Senior Adviser to Ms Rebekha Sharkie MP, an intellectual interest in climate change and environmental conservation has developed through greater understanding into an active and keen interest. It is through this lens that I seek to encourage the university to publicly adopt a clear emissions target – ideally, a minimum target of net zero (CO2 equivalent) emissions by 2030. I have searched unsuccessfully for any such commitment that the University may have made.

None of this is to detract from the very good work that The University of Adelaide has already undertaken to reduce its environmental footprint, such as its commitment as a Carbon Neutral Adelaide Partner, and work done under its sustainability engagement program, Ecoversity. These initiatives should rightfully be recognised as excellent steps in the right direction to ensure the university is doing its part in safeguarding Australian and global livelihoods and our shared environment.

The University of Adelaide has an opportunity to position itself on climate change as ‘running with its peers’, although that opportunity may soon pass.

May I kindly request, is the University Council (or university administration) actively considering a net zero emission target?

If so, what is the likely timeline on a decision on that target?

If not, I kindly and strongly encourage the Council to actively deliberate on setting a net zero emissions target and set a deadline for that decision.