Thank you in advance for your time and consideration of my correspondence and for maintaining the NatureMaps application and website.

I am writing in my personal capacity with a keen interest in environmental conservation and in public accessibility to – and enjoyment of – our natural environment.

For example, since providing GIS coordinates for Lawari CP to Google Maps a few years ago, there have been 50,000 public views of the photos assigned in Google Maps to the Park. Hopefully this demonstrates the public value, and especially tourism value, in having NPWSA sites properly shown on public mapping applications.

May I kindly request, can Enviro Data SA provide me with the GIS data – or instructions on how to access that data – for the NPWSA Reserves (outlines), noting my intention to provide this data to Google Maps?

If not, would Enviro Data SA be willing to provide the data directly to Google Maps?

Would it be possible to set up a process by which the data could regularly be made available (for example, annually) to publicly accessible mapping providers such as Google Maps?

Re: City of Onkaparinga, Aldinga Washpool, and the new Conservation Park

I hope this correspondence finds you well; you would remember me from my time as former Senior Policy Adviser to Ms Rebekha Sharkie MP. Thank you for your own ongoing efforts and support for permanent conservation of the Aldinga Washpool site.

I am writing to you in my personal capacity and out of a keen interest in environmental conservation. The permanent conservation of Aldinga Washpool was an issue I worked upon during my employment with Ms Sharkie, and since then I have been providing advice to the local Washpool Coalition and undertaking my own advocacy on the issue with the State Government.

I too am concerned that there are land parcels at the Aldinga Washpool site that have yet to be confirmed will be a part of the eventual conservation park (as shown in the map at: https://www.parks.sa.gov.au/park-management/aldinga-washpool). These include land parcels which I understand are directly owned by the City of Onkaparinga, or is Crown land under their care, namely:

May I kindly request an update on whether these parcels are still under Council ownership (and/or care), and whether there is active consideration for their addition to the new Conservation Park?

If so, what is the likely process (such as a vote at Council) and timing for a decision to be made by the City of Onkaparinga?

Thank you again for your support on this issue and for your time and consideration. 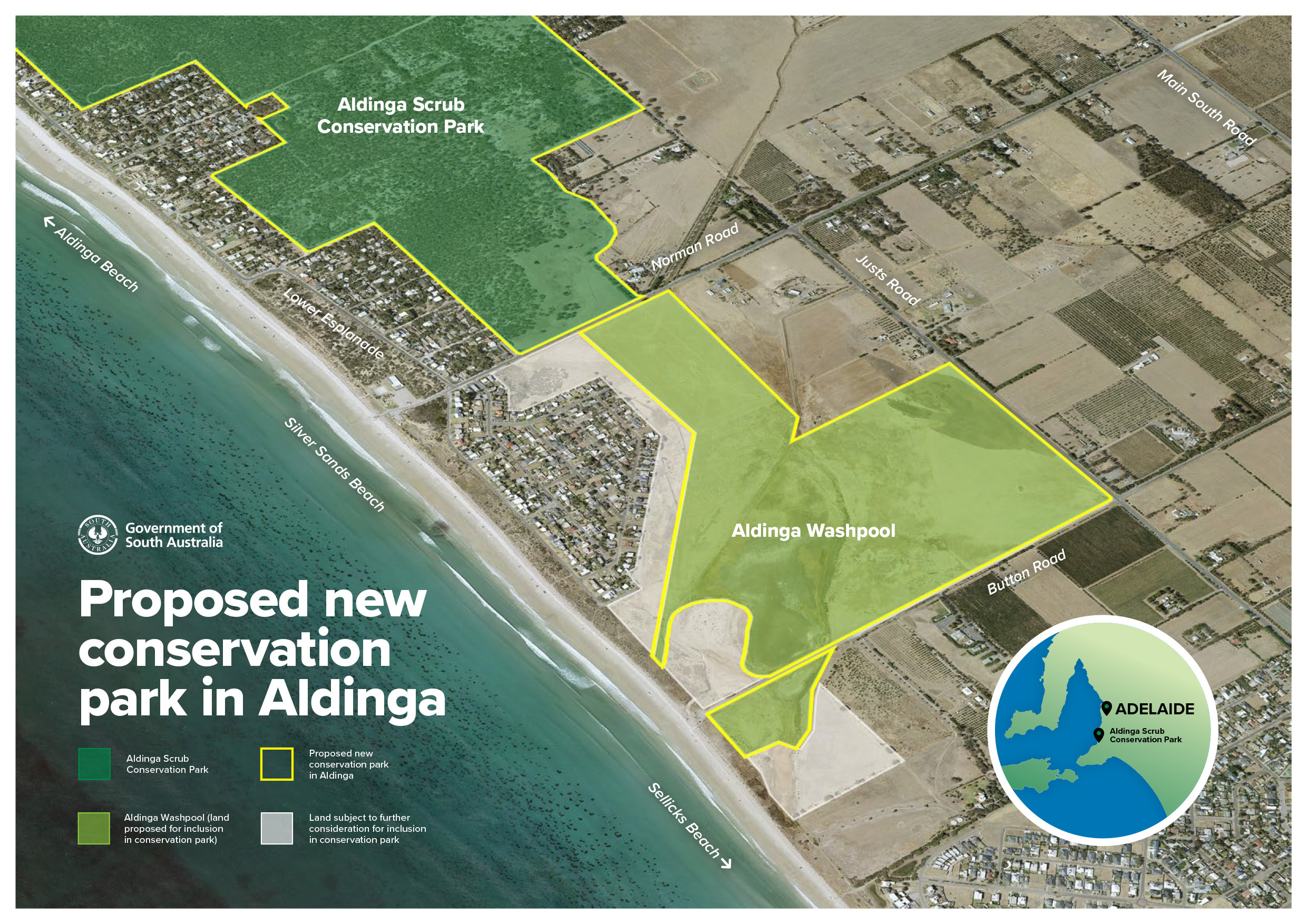 One of Adelaide’s last remaining coastal freshwater and estuarine lagoon systems will form part of a new conservation park at Aldinga with the Marshall Liberal Government stepping in to protect the area from potential housing development.

Aldinga Washpool, in Adelaide’s south is a well-known habitat for a wide range of native species, particularly birds and swamp plants of conservation significance, including a threatened coastal saltmarsh that’s nationally listed as a vulnerable threatened ecological community.

The Washpool is also of considerable spiritual and cultural significance to the Kaurna people and contains numerous archaeological sites and artefacts.

Minister for Environment and Water David Speirs said the Washpool land will be combined with the adjacent Aldinga Scrub Conservation Park to create one new conservation park.

“This is a significant moment for the local community who have been championing for the Aldinga Washpool to be protected for decades,” Minister Speirs said.

“The Marshall Liberal Government is committed to improving conservation and increasing the amount of open, green space available for people to explore and by combining the Aldinga Washpool land with the nearby Aldinga Scrub Conservation Park we will create a fantastic ecological and cultural haven just south of Adelaide.

“This follows the creation of Adelaide’s second metropolitan national park at Glenthorne and builds on our government’s record investment in open space and our historic push to increase the amount of space protected as national parks across the state.

“This is in stark contrast to the former Labor Government who ripped funding away from the environment and failed to rule out selling off these precious pieces of land to developers.

“In 2018, a Washpool Working Group was established, and we have been working closely with this group to ensure the land’s cultural and environmental values be protected and restored.

“The Department for Environment and Water, SA Water, Green Adelaide, City of Onkaparinga and other members of the working group have been working on flood mitigation, stormwater management, weed control, revegetation plans, water quality and protection of Aboriginal cultural heritage.”

“We will now work with the local community about the future management, and a planning process will commence next year to consolidate hydrological, ecological, and cultural work done so far.”

Recognising its cultural and environmental significance, and that it’s now surplus to SA Water operational requirements, the entirety of the Aldinga Washpool land has been transferred, encompassing five allotments totalling 31.64 hectares. There is also a mix of State Government tenures in the process of being transferred.

When complete, the total area of land added to park will be about 74 hectares.

I write to you as a former senior adviser to Ms Rebekha Sharkie, the Member for Mayo, with a keen interest in environmental conservation. I wish to commend the State Liberal Government on its 2018 election commitment to construct three artificial reefs.

My understanding is that separate to the original pilot oyster reef of Windara near Ardrossan, the three reef projects are the Glenelg reef (construction now complete), a reef near Noarlunga, and the Kangaroo Island reef near American River.

It appears that the Glenelg reef was constructed with State Government funding, but it is unclear what contribution – if any – the State Government is making to fund the second and third reefs alongside the welcome Reef Builder funding announcement from the Federal Government.

May I kindly inquire, will the State Government be making financial contributions to the Noarlunga and Kangaroo Island oyster reef restoration projects? If so, how much over what time frame, and if not, why not?

Thank you for your time and consideration of my correspondence.

Cc Minister for the Environment, the Hon David Speirs MP

RE: Conservation of the Aldinga Washpool site

I write to you as a former senior adviser to Ms Rebekha Sharkie, the Member for Mayo, with a keen interest in environmental conservation. It was during this time that I became familiar with the current situation regarding the Aldinga Washpool site.

The Aldinga Washpool is one of the last remaining coastal freshwater and estuarine lagoon systems along the Adelaide metropolitan coast and includes a threatened temperate coastal saltmarsh, which is nationally listed as a vulnerable, threatened ecological community under the Environment Protection and Biodiversity Conservation Act 1999 (Cth).

With even limited investment in environmental restoration, the Washpool can also provide considerable social benefits and economic (environmental tourism, especially birdwatching) opportunities to the local community and its visitors.  Currently, ownership of the Washpool site is fractured amongst several Government stakeholders, including SA Water, the City of Onkaparinga, the Coastal Protection Board, and State Government Departments. There have been local community concerns that parcels of Washpool land may be sold for development.

A coalition of environmental, community and local business groups has been forming to pursue a State Government commitment to conservation of the Washpool site. A commitment to permanent conservation of the Aldinga Washpool site is an opportunity for the State Government to cement their local social, economic and environmental credentials with the Aldinga and surrounding communities within the Mawson electorate.

You would no doubt be aware that Mawson was the most marginal electorate in last the South Australian election and remains a highly marginal seat in the forthcoming 2022 State election. Labor has made a public commitment to conserve the Aldinga Washpool in its entirety, although their statements have omitted any detail on the how, when, or vision for the site.

As I understand it, your Government has been considering the conservation proposition for the Washpool for some time.

Now is the time to match – and surpass – Labor’s commitment.

A clear public commitment to a durable conservation solution for the Washpool site – for example, its annexation to the adjacent Aldinga Scrub Conservation Park – including a clear timeframe for delivery and modest investment in improving the site’s general environmental amenity, would be of great benefit to the local community and all South Australians, would outperform Labor’s commitment, and would certainly delight the gathering strength of the local coalition of environmental, community and business groups pursuing the Washpool’s conservation.

I strongly encourage the State Government to act decisively on this opportunity.

Thank you again for your time and consideration of my letter.