Note: the enclosure referred to in the correspondence can be found in my earlier update: http://michaelcornish.org/2021/11/22/update-9-australian-ratification-of-the-minamata-convention-on-mercury/ 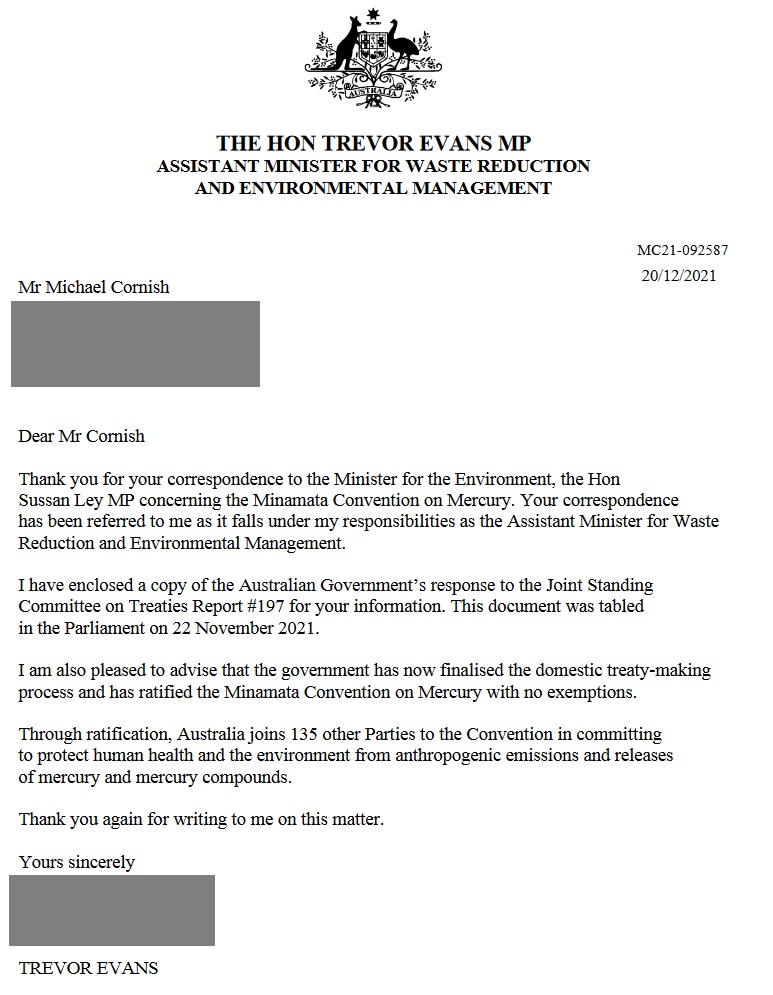 The Government has just released it’s response to the Joint Standing Committee on Treaties inquiry into the Minamata Convention on Mercury:

A reproduction of this response below:

The same letter was also sent to the Shadow Minister for the Environment and Water, the Hon Susan Close MP.

I write to you as a former Senior Policy Adviser to the Federal Member for Mayo, Rebekha Sharkie MP, with a keen interest in the environment and public health.

I note that there are currently no Air Quality Monitoring[1] sites in the Adelaide metropolitan area north or north-east of the Air Quality Monitoring site at Northfield, leaving large communities in the northern and north-eastern suburbs – including the marginal electorates of Wright and King, and to a lesser extent, Newland – without access to air quality data. Based on 2016 Census data, this area accounts for at approximately 348,000 people[2], which is over 26% of the 2016 population of metropolitan Adelaide[3]. Unfortunately, climate change is set to increase the prevalence and impact of bushfires and smoke, leading to an increase in community air quality concerns.

Air quality data is particularly valuable to vulnerable groups, such as the young, the elderly, and people with respiratory problems who can face life-threatening consequences from poor quality air. For example, an estimated 11% of the population have asthma[4], meaning there are an estimated more than 38,000 asthmatics within the north/north-eastern metropolitan Adelaide area, let alone other vulnerable groups.

Will your party commit to establishing an Air Quality Monitoring site in an appropriate location in the northern/north-eastern suburbs of Adelaide?

Further, will your party commit to this site measuring NO2, PM10 (1 hour), PM10 (24 hours), and O3 (1 hour) and O3 (4 hours), noting that this would simply mirror the monitoring undertaken at the southernmost metropolitan Adelaide monitoring site at Christies Beach?

[3] 1,295,714 people as of the 2016 Census in the Greater Adelaide, Greater Capital City Statistical Area; see: https://quickstats.censusdata.abs.gov.au/census_services/getproduct/census/2016/quickstat/4GADE?opendocument